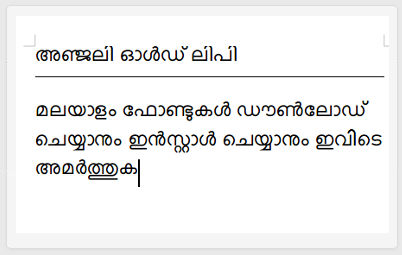 Anjali Old Lipi is a regular malayalam font created by Kevin and Siji. Current Version of the font is 6.1.1. it is an orginal Malayalam script with Unicode mapping and Opentype features. 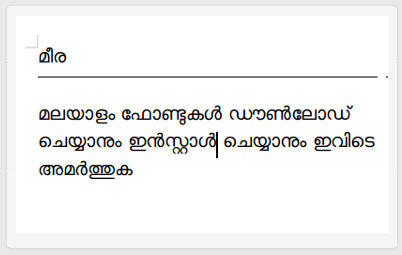 Meera is a Malayalam traditional script font created for the GNU system. It is a Medium OpenType font. The inspiration for this font is drawn from Rachana Aksharavedi.

People who created this font are 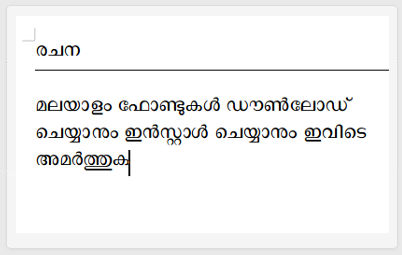 Rachana is a traditional Malayalam font created by Rachana Akshara Vedi in 2005. It contains exhaustive character set of Malayalam and is primarily created for the GNU/Linux system. 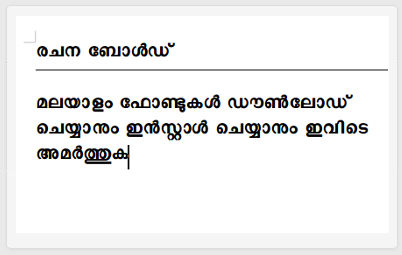 Rachana Bold is created by designer of Rachana font, K.H Hussain . Opentype featuring is done by Rajeesh K Nambiar. This font is developed and maintained by Swathanthra Malayalam Computing. Rachana bold is developed with the financial support from International Centre for Free and Open Source Software (ICFOSS), Govt of Kerala in 2014-15.

The license of Rachana font is GPLv3 or Later+ Font Exception and Rachana Bold is OFL 1.1. 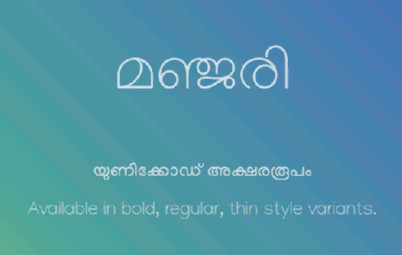 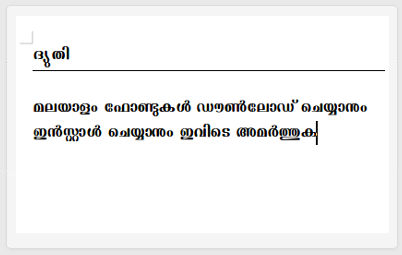 The font is licensed under GNU GENERAL PUBLIC LICENSE V3.0 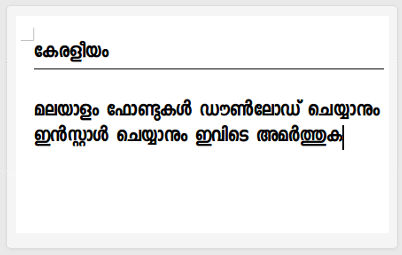 Keraleeyam is a Bold letter Malayalam font created by Hussain KH and SMC.

Keraleeyam font was first designed as an ASCII font in 2005 and distributed with Rachana editor. This Unicode font is based on Rachana's exhaustive character set of traditional Malayalam Lipi is totally redesigned as a part of the Grant (2014-2015) received from India Foundation for the Arts, Bangalore under Arts Research and Documentation Programme. The font is dedicated to the environmental activism in Kerala. 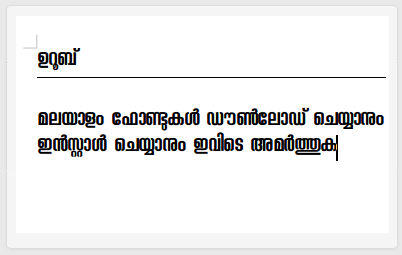 Uroob is a Bold letter Font created by Hussain KH and SMC.

The font is Developed with the financial support from International Centre for Free and Open Source Software(ICFOSS), Govt of Kerala in 2014-15. Uroob font is Dedicated to Uroob (P.C. Kuttykrishnan), celebrating the 60th anniversary of Ummachu. 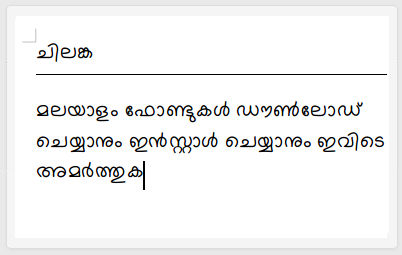 Chilanka is a handwriting font for malayalam created by Santhosh Thottingal. It supports traditional Malayalam Script and old style writing of complex letters. This is a beautiful handwriting font in malayalam with latest unicode support. 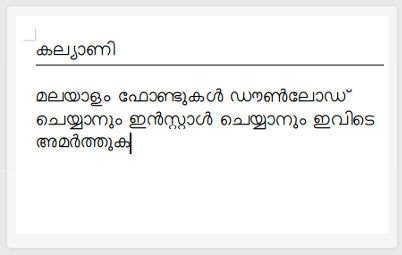 Kalyani is a regular Malayalam Unicode Font created by Shaji N V in 2002.

This font is the first unicode font in Malayalam language. It was created by Shaji N V in 2002 from TeX archive font created by Jeroen Hellingman using a tool named Pfaedit. In 2003 Baiju M added GSUB tables to the font and renamed it as MalOtf.ttf .This was the default font in Sopananam GNU/Linux, (first GNU/Linux custom distribution with Malayalam Inteface) released as a part of UNDP-KBIP-FSF India project. In 2008 Hiran Venugopalan modified the font and added missing glyphs, feature tables and made it compatible to unicode 5.0. 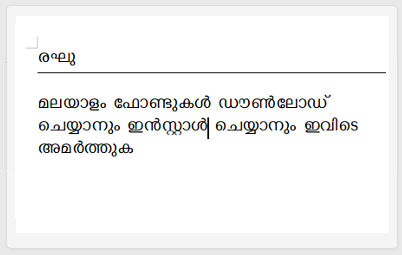 In 2008, developers from swathanthra Malayalam Computing started maintaining the font as a tribute to him. Suresh P modified opentype tables and added more glyphs to make it compatible with modern rendering systems. 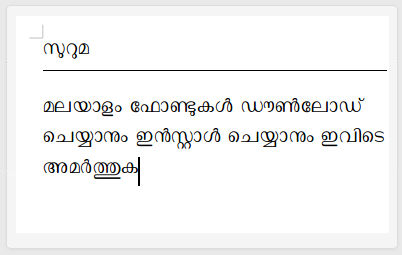 Suruma is a regular Malayalam font created by suresh p on 2007. Suruma-3.2.1 is a rehash of earlier releases. The earlier idea of akhand conjuncts for *RA *LA forms is revisited and implemented again with the new opentype specs. The new specs do away with statically-assigned character properties (by the shaping engine) for consonants. Instead, they are font dependent. i.e., post-base forms, below-base forms etc. are all decided by the the font itself. This concept was also used in the initial version of suruma font. 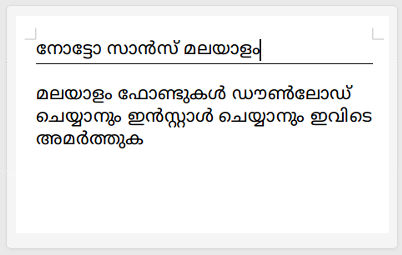 Noto Sans is a font created and maintained by Google in various langauges. Noto Sans Malayalam is the Malayalam version of the font. This font is a Malayalam new lipi font. Current Version is 1.03 and the font is designed by Monotype design team in google. 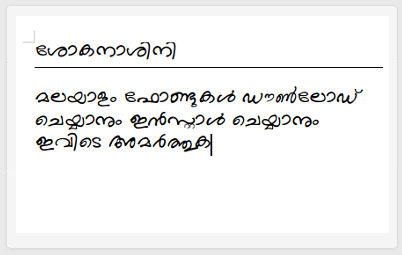 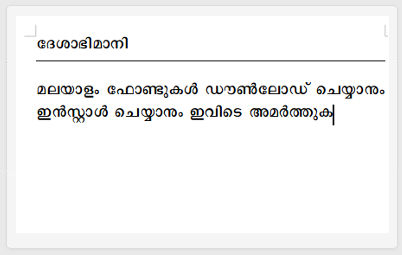 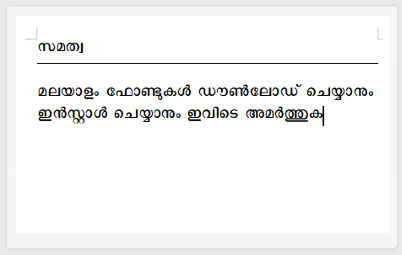 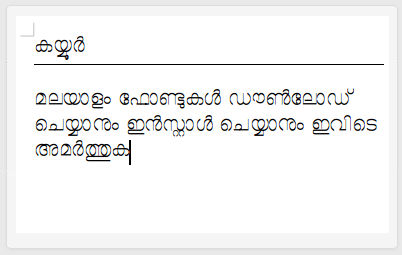 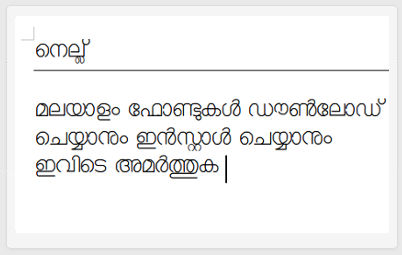 Malayalam Unicode Fonts are required to view malayalam in web browser. Most of malayalam unicode fonts are available for free due to its open license. Most of the malayalam fonts are provided by Swathanthra Malayalam Computing. All the font preview are listed on the Malayalam Fonts page of SMC Website.

Lot of Malayalam ASCII fonts are available. Most of the fonts are Proprietary. The majour number of fonts are came from CDAC with their malayalam typing package ISM GIST. Popular news papers in malayalam like Malayalamanorama (manorama.ttf), Deepika has their own fonts. To read these news paper websites the corresponding font must be installed on the computer. Malayalam web fonts are used to overcome this problem. Also these malayalam fonts have their own keyboard layouts. Special softwares are used to create malayalam content in these fonts.